The Toe Tap: The Art of Muay Thai 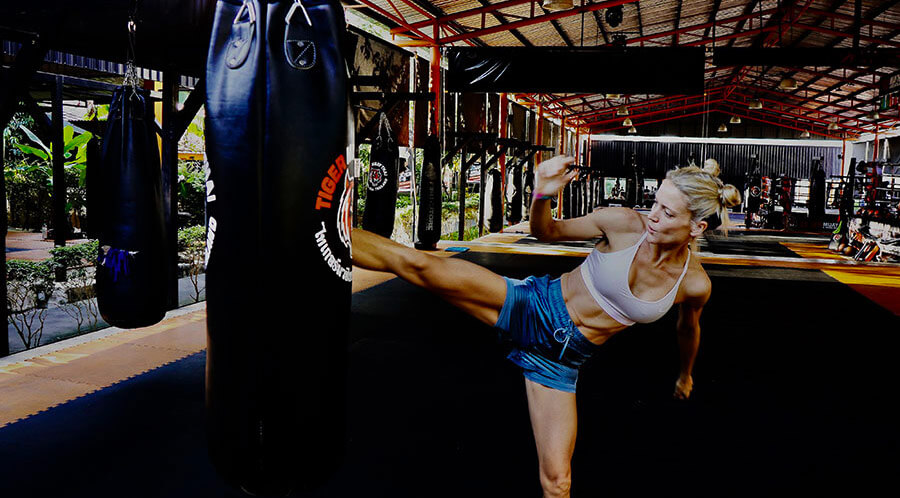 I’ve been thinking about my year of travel lately (March 2018 – April 2019). I’ve realized there are many unspoken words and unshared experiences that still sit with me.

Stories that I feel need to somehow be recorded to try and preserve these precious memories. A few days ago, I found this draft in my notes on my phone, an article I had written on the plane journey home, following a trip to South East Asia. All the memories rushed back and I felt like I was right back there. Luckily, I had documented it at the height of emotion and how it all made me feel at the time. In this article, I’m going back in time. I’m returning to Phuket, Thailand – to a little, remote street called Soi-Taeid.

It was a typical, balmy evening in Thailand. One could simply sense the coming of the next downpour of rain, with thick humidity and stickiness consuming the air. I sat amongst the locals at the Fairtex stadium, preparing to witness a my first ever professional Muay Thai fight. And it wasn’t just any fight. I was there in support of Phat, my private Muay Thai trainer. 34-years-old, retired and spiriting the physique of a 16-year-old! I became very attached to him during our sessions together. A trust was inevitably formed between us, at least it did for me. As my sessions with him progressed, I was introduced to his lovely wife, little boy and beloved cockerel. Intrigue led me to buy this ticket in an attempt to understand his fighting capability, particularly because he had won the Thailand title five times previously. This was his first fight in years, assuring me of his caution to preserve his once severely injured body. 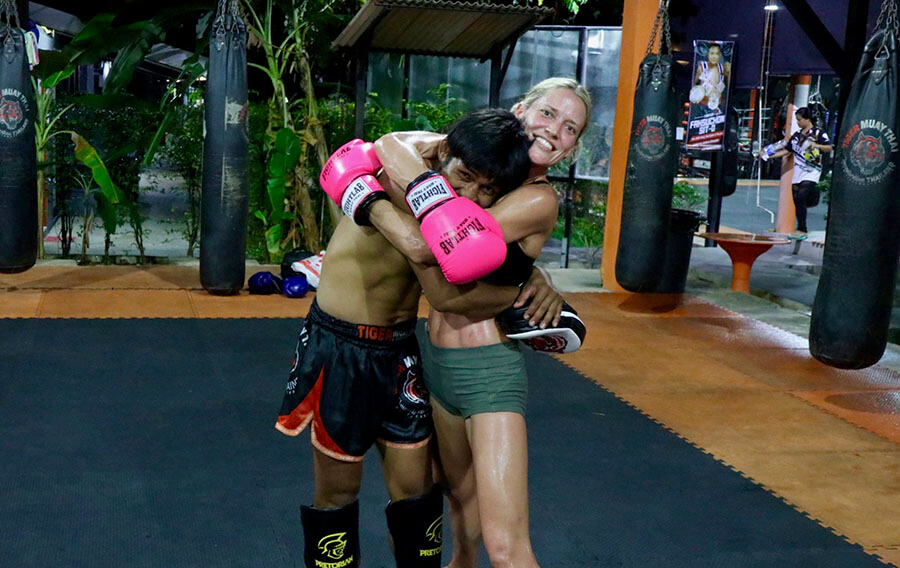 I had been at this location for roughly 2 weeks, exploring what they call “Fighter Street”. I didn’t quite know what I was getting myself into, except that I was exploring Phuket for the first time. I envisioned my first visit to Thailand as lying on a beach, swimming in warm, tropical water and sipping away at a Pina Colada. Instead, here I was. On a street that offered a temporary home to those wishing to learn martial arts, bravely attempting CrossFit and sipping away at a protein shake! A place that offered its welcoming hand to visitors from all over the world, far and wide. A sort of health and fitness “sanctuary”, providing everything from delicious Thai cuisine and massage therapy to fighting and friendship.

To describe a typical day, it consisted of two hours of training in the morning, followed by oatmeal pancakes layered with a generous portion of peanut butter and blueberries. During the relentless heat of the day, working away in air-conditioned cafes and restaurants became the norm, followed by another 2 hours of training in the late afternoon. A full body Thai massage became a necessity with all the aches and pains that started to surface, and then, to then end it all off, we visited “mama’s” family-owned restaurant for the authentic Thai cooking. This became routine, and as I’m sure you can imagine, over a period of three weeks, I started to feel the healthiest version of myself that I’d felt for years. 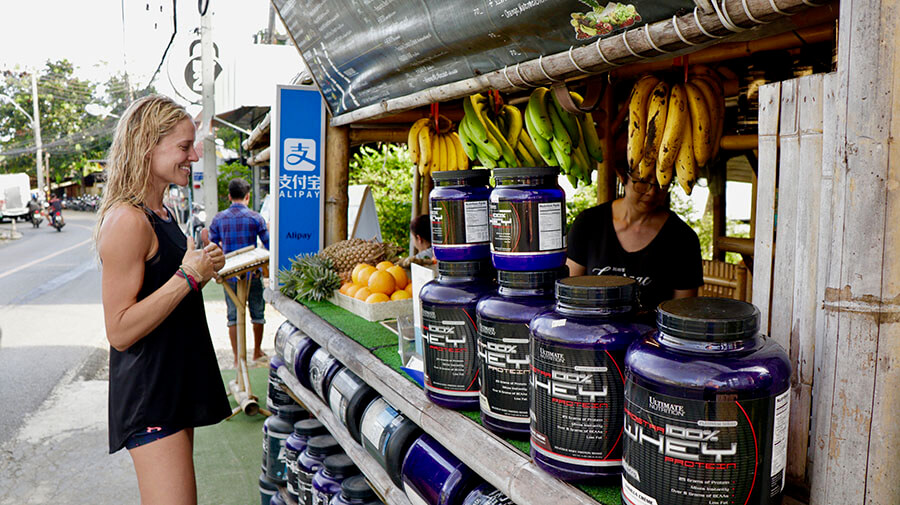 I must admit, I secretly love Martial Arts. In fact, I distinctly remember as a young kid watching Quinten Tarantino films, infatuated with Uma Thurman in “Kill Bill”. Her strength. Her skill to defend. Her supernatural power. The way she moved. Her elegance in the kill as a make-believe, Manga comic character. And here I was years later, learning the art of Muay Thai. Naturally, I’m not a fighter. But I do believe in self-defence, and how important it’s becoming for women to be able to defend themselves in a very unpredictable time in this world.

So, here I sat on the outskirts of the arena. Amongst the locals, drinking their beer and observing their evident excitement over and love for “the fight”. Phat was on. The dance began. I saw red. The young men walked around all four railings, bowing their heads to the anticipating audience. Extending their backs over branded ropes encircling the ring, they rocked backwards and forwards, stretching their pecks as if to insinuate dominance. They prowled around each other like lions, ready to pounce, the corner of their eyes searching for any such clue of weakness from their opponent. They moved their bodies in sync with the chanting jingle-jangle melody, stretching their hip flexors, waving their arms like wings of a heron about to take flight. Back forth, back forth. They lowered their heads onto the ground, pressing beads of sweat into the mat which would inevitably absorb their blood. The music stopped. I could smell the sweat. They walked towards one another tapping knuckles through drenched wraps and padded gloves, connecting hearts together in acknowledgement for whatever result would be their fate.

The referee swiped his arm between these destined forces, as if to slice the wall of pre-built tension in the air. The front toe began to tap, propelling the leg up to a 90-degree height like a spring. Although composed, the evident flow of adrenaline fuelled their movements. Tap-tap-kick. Tap-tap-kick. The excited audience screamed and cheered at the prospect of where their bets would lead.

As I sat there in the stadium, staring down at a fight between these young, beautifully sculpted Thai warriors, I was struck more by the execution of an art form. Muay Thai is respectful. Honourable. A discipline. An ancient skill. But most of all, it’s a creative dance performed as an integral part of a culture. It’s taught and performed from a surprisingly young age. The calculated, defensive stance, the tip-tap of the toe, the clench, the jab of the knees to the rib cage. The uppercut. The block. All is executed with passion, precision and presence. 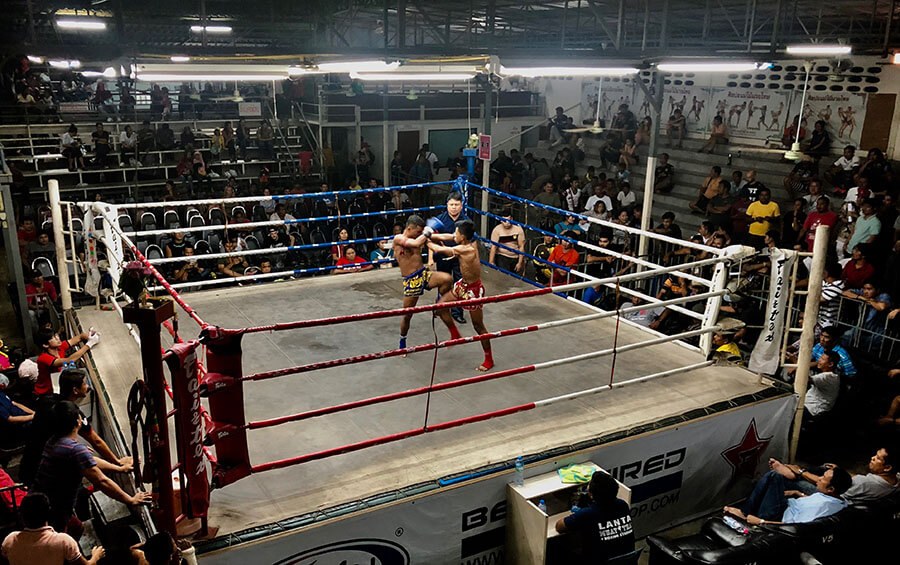 At this stage the bones in my fingers were bruised to the extent that I couldn’t open a bottle of water. My shoulders felt dislocated. I sprained my right ankle. In fact, I had bruising all over my body.

I started with a beginner class, where I was introduced to the basic techniques, fitness and of course the very skilled trainers. I then paired that with private sessions, extracting as much as I could from the Masters extensive knowledge and expertise. I learned that each trainer offers a unique point of learning whether it be endurance, technique or even philosophy. But it was a combination of Phat’s fight and my very last private class that “the penny finally dropped” and I started to understand the nature of this sacred practice.

At this stage the bones in my fingers were bruised to the extent that I couldn’t open a bottle of water. My shoulders felt dislocated. I sprained my right ankle. In fact, I had bruising all over my body. At one stage I even endured an intensive abdominal “beating” to the stomach with a pad which brought blood to the surface of my skin. The inflammation in my body brought me to tears…and a lot of Panadol! But I humbly accepted it all because deep down I knew in some strange way I was being cared for. Prepared. That each trainer generously shared his own personal story, through every correction in movement. The pain became a non-event. A constant reminder to always remain alert, avoiding complacency at all cost.

I truly encountered the meaning of that pain in the last few minutes of Phat’s fight. Not once did he give any inclination that he was in pain, even though, as I found out later, the injury had occurred early on in the fight. All I saw was the elegant tapping of his toe. He courageously held his head high and was almost expressionless. But as he left the stage, defeated, he collapsed in the arms of his supporting friends. I immediately ran backstage, worried for his well-being. 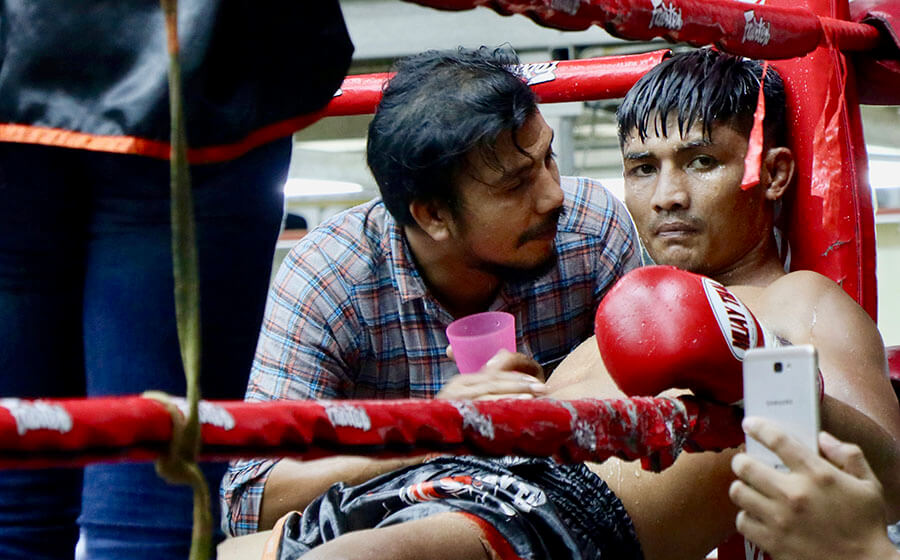 There he was. Slumped over a bench, moaning in agony. I swallowed my beating heart. His right foot was swollen to twice its size and was slowly transforming into various shades of black and blue. I grabbed what was left of the ice, hunched onto all fours and wrapped it in what looked like his shorts, gently cupping my hands over the progressively swelling foot. He moaned once more in agony. I closed my eyes, praying a prayer of healing. I rubbed the back of his Achilles Tendon and calf, desperately trying to nurture him in any way knew possible. Then, I looked up to finally catch his gaze. His eyes spoke volumes. Sadness. Disappointment. Softness. And in that moment, I believe I understood pride, courage, endurance and defeat. All wrapped up in the pain of his throbbing foot…and heart. 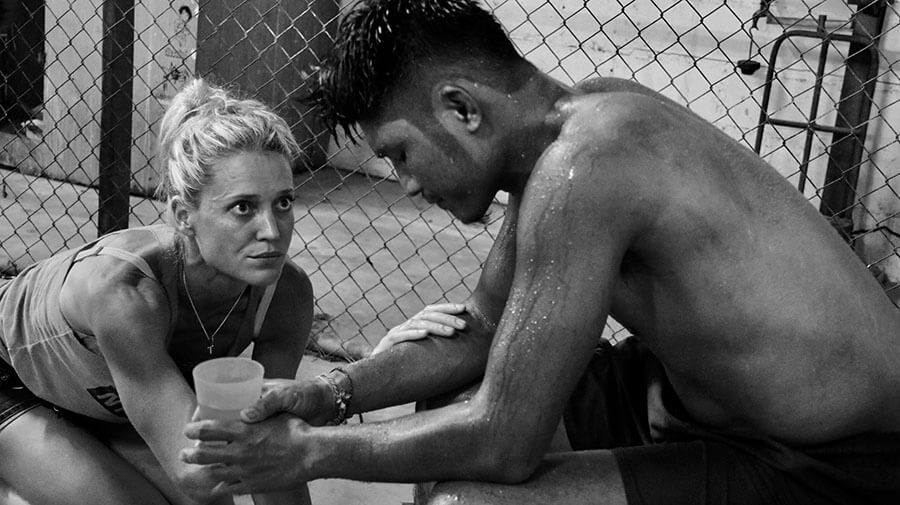 Following the fight, I had my final private lesson with Kru Paeng, an elder and master in Muay Thai, with over 250 fights under his belt. It was 6pm, cool and quiet. I chose to push through any pain or discomfort that surfaced in my body. It seemed irrelevant. He was much gentler and contained in his approach and focused primarily on my technique. But more than anything, ironically, he chose to teach me the art of the “toe tap”. Memories of Phat’s fight flooded back. What I saw on stage became a reality. I suddenly became the dancer. In my willingness to learn, I was given a brief taste of what was behind the toe tap. It felt almost like an “antenna” for power, as if the purpose of it was to feel out the perfect moment to strike, without sacrificing “grace”. That this type of footwork established strength in stance, and substantiated the importance of always seeking balance.

As a complete amateur, I will never quite understand the full extent of that power. Or the fullness of it’s art. What it will ever feel like to stand opposite an opponent in the arena. But I do feel fortunate enough that I was taken to the depth of a culture, exposed to an inherent artform and a tradition that exudes grace. 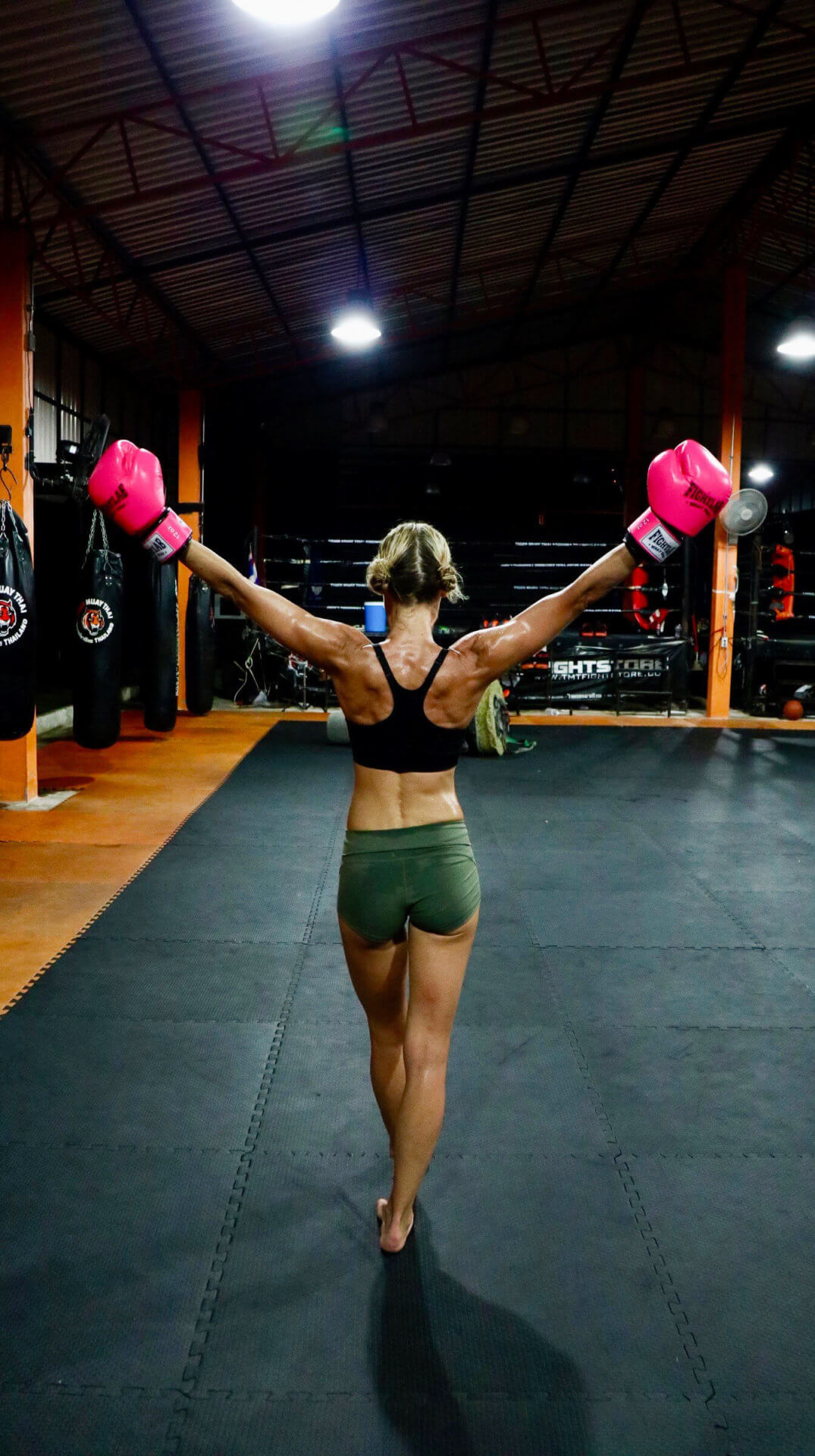 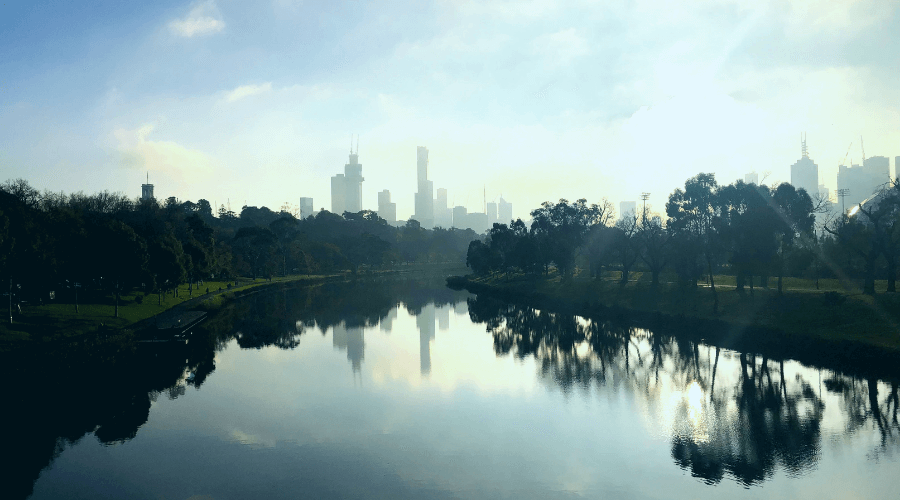 I couldn’t help but think of a photo I had taken some months ago, when first arriving in Melbourne. I unexpectedly took it one Sunday afternoon, whilst walking over the Yarra River bridge. I had recently sold off my entire life and had moved to a new country. I was... 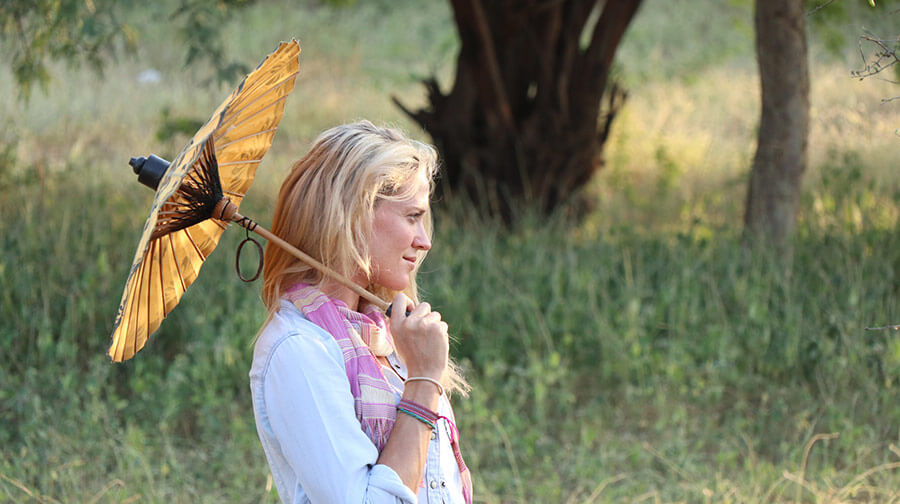 Perfectly Bagan: The Land of Childlike Wonder I’m thinking of a title to best describe my first experience of Myanmar. Buddhist temples and hot air balloons were the original catalysts in mind, urging me to visit this ancient country. And before I knew it I found... 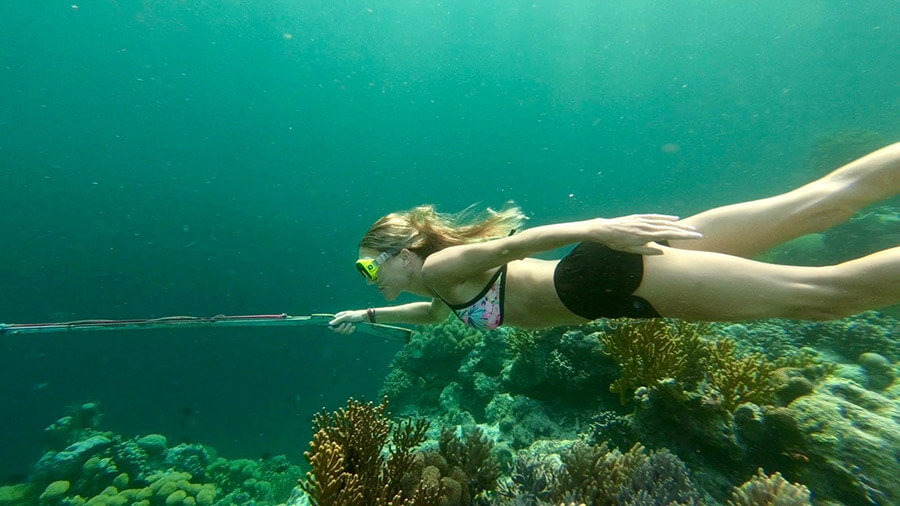 Moments in Time: Lessons Learned on the Wakatobi Islands

Moments in Time: Lessons Learned on the Wakatobi Islands It's 5.45am on Sunday morning, the 29th of July 2018. I woke up to an unfamiliar rocking in my bed. A strange rumbling and vibration sent me into overwhelm. "What's going on?" I asked myself in disbelief. Could...